After putting in plenty of hours of studio time over the past few months, my recent collection of paintings were ready to be exhibited at Claymore Wines for SALA 2015. In the end, I managed to surpass my expectations by producing 34 works. I eventually entitled the exhibition ‘Sunlight and Sentinels', as it seemed to encapsulate the spirit of the pieces to be displayed. The term ‘sentinel’ can be defined as a ‘person or object that watches or stands as if watching over someone or something’. The tenure of sentinels can vary; from a fleeting moment of human occupation to that of a silent monument that remain steadfastly vigilant in its fixed position. The landscape of the mid-north of South Australia provided me with plenty of examples of such temporary and generational artifacts that have become a recognisable presence across this region.

The exhibition opening was a great chance to meet members of the local art community while Chrissy and her team at Claymore Wines were also hugely supportive, both during the set-up and on the night. I was pleased that much of the subject matter and figurative elements were recognisable to the viewers and that the work evoked such interesting discussion. Likewise the generous feedback was much appreciated. The exhibition remains open throughout August and so hopefully there will be plenty of other visitors, in addition to family and friends, over the next few weeks. 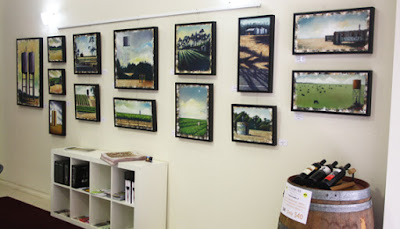 Posted by studiomeadows at 20:39 No comments: